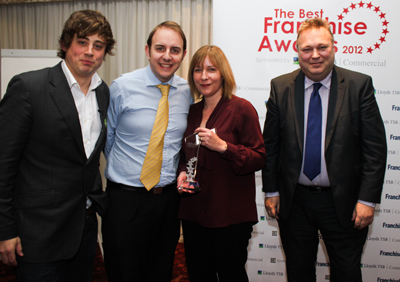 The winners were selected based on feedback from over 2,000 franchisees, gathered through an industry-wide study of franchisee satisfaction.The Best Large Franchisor award was open to franchisors with over 50 franchisees in their networks and this year’s finalists were TaxAssist Accountants, McDonalds and Action Coach.

Franchisees were invited to complete the anonymous Franchise Satisfaction Benchmark survey and rate the training and support provided by their franchisor, the franchise system and their overall franchise ownership experience.

Sarah Robertson, Business Development Director of TaxAssist Accountants said: “We are thrilled to have won these two prestigious awards ahead of the likes of McDonalds and Action Coach who were strong contenders.The awards recognise the strength of our business model and the support we give to our franchisees, both of which we pride ourselves on.”

Richard Holden, Head of Franchising at Lloyds TSB Commercial and sponsors of the awards initiative, said: “The UK franchise market continues to display strong growth, reflected in the shortlisted nominees, and plays a vital part in the UK economy.”

Steven Frost, Partner, Smith & Henderson, which coordinates the programme, said, “The Best Franchise Awards are based on what really counts – the experience of thousands of actual franchisees.”