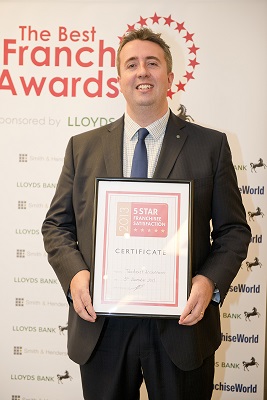 As part of the Franchise Benchmark surveys and Awards run by Smith & Henderson, this year, a 5 Star Franchisee Satisfaction award has been introduced to further recognise excellence and encourage greater transparency in UK Franchising.

At Smith & Henderson’s annual conference on the 5th of December, TaxAssist Accountants were amongst the first franchisors to be recognised with this accolade. David Paulson, Senior Manager, Franchise Recruitment, is pictured with the certificate.

How is 5 Star Franchisee Satisfaction awarded?

In order to qualify a franchisor must meet a strict criteria including:
- Having a network of 20 plus franchisees in the UK
- Participate in the full franchise Benchmark Survey
- A minimum of 50% of franchisees completing the survey

Based on the feedback of all franchisees surveyed the 5 Star Franchisee Satisfaction is awarded to those franchisors that score above average in all of the key areas which are:

75 franchisors took part in the Benchmark Survey during 2013 and less than 15 franchisors qualified as having 5 Star Franchisee Satisfaction putting us right up there with the best of the best of UK franchising.

"The team at TaxAssist are focused on delivering a comprehensive support package to their network which allows their franchisees to focus on new business generation as well as supporting their existing client base.''

Karl Sandall, Chief Executive of TaxAssist Accountants proudly states “What a year it has been for our franchise. Now that we have been granted this fantastic recognition we will be working hard to maintain it! ".

If you would like to learn more about the 5 Star Franchisee Satisfaction then please visit www.5starfranchise.co.uk and for more about Smith & Henderson (now called WorkBuzz) click here.