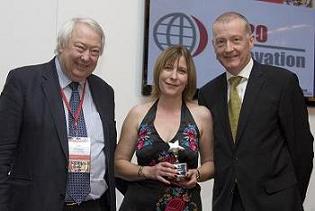 The awards, presented by Ian Fletcher at a prestigious awards ceremony in Birmingham, aim to celebrate the strength and success of individuals and businesses within the accountancy sector.

Sarah founded a successful Brand Agency ‘The Point’ in 1994 which became one of the foremost marketing communications agencies in the Eastern region with billings in excess of £4.5m.

Sarah joined TaxAssist Accountants in 2004, bringing with her 20 years' experience in the marketing and advertising industry, including working with a broad range of national and regional brands such as the British Red Cross, Norwich Union (now Aviva), Oracle, Del Monte, the Imperial Cancer Research Fund and Swinton Insurance.

Chief Executive Karl Sandall comments; “Despite the economic climate we have had an outstanding year. The strategies and initiatives employed by Sarah have allowed TaxAssist Accountants to continue to build on our success by capitalising on the significant growth opportunities both domestically and internationally”.