TaxAssist has been named ‘Best Franchise Business to Business’, cementing its position as one of the leading franchise opportunities in the UK. 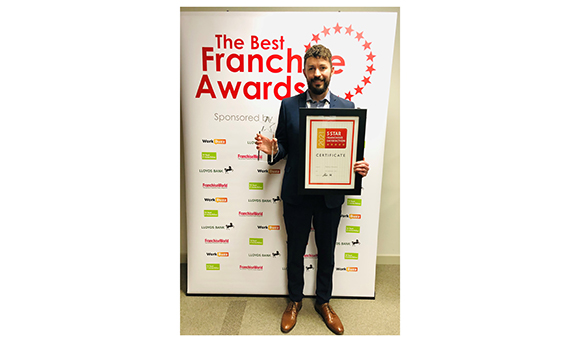 Following its ninth consecutive ‘5 Star Franchise Satisfaction Award’ and, as a result of feedback from its franchisees gathered by WorkBuzz, TaxAssist Accountants has been presented with a Best Franchise Award after impressing the judges with its leadership, resilience and support structures.

The award was presented during the prestigious British Franchise Association (bfa) Annual Conference & Awards at the Vox in Birmingham, with Richard Chatten-Hague, Senior Manager, Global Franchise Support (pictured above) and Nikki Haythorne, UK Franchise Recruitment Manager, collecting the award on behalf of The TaxAssist Group.

Karl Sandall, Chief Executive Director at TaxAssist Accountants, said: “We are delighted to have won this award, which is extra special because it is based, in part, on feedback from our network of franchisees.

“Awards such as this are always very competitive, and it is thanks to all the sterling work carried out by the staff at our Support Centre and our franchise network’s resilience through the pandemic that we have once again triumphed in a major award ceremony.”

“It has been inspiring to hear how franchisors priorities have shifted from surviving in 2020 to thriving in 2021 with so many entries detailing phenomenal growth and performance within their networks. It is clear the feedback received from the surveys has helped brands to tailor their support to the needs of their franchisees which has reflected in fantastic growth coming out of lockdown.”

Steven Frost Founder and CEO of WorkBuzz said: “These last 18 months have been really testing for even the best businesses and their people, so there’s never been a more important time to celebrate how great franchisors have supported their franchise networks.

“TaxAssist Accountants demonstrated great leadership and resilience throughout the pandemic. By prioritising their people and innovation, they have emerged even stronger. I would like to congratulate TaxAssist Accountants on what they’ve achieved and the difference they’ve made.”

To learn more about the Best Franchise Programme, follow this link: www.bestfranchiseawards.co.uk